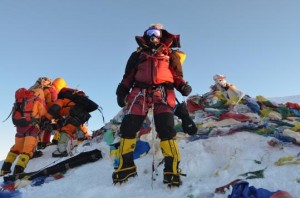 Vanessa O’Brien on the summit of Mount Everest.

Two Boston women are taking on some of the most brutal challenges on the planet.

Next week, Vanessa O’Brien, of Boston, sets off for the North Pole in a race against time. According to an article in the Boston Globe, she needs to make it to the pole this month in order to set a new world record for climbing the highest peaks on all seven continents, and reaching the South and North poles, faster than any woman ever has. She intends to complete that feat, known as the Explorers’ Grand Slam, in about 11 months.

Meanwhile, Allston teacher Liz Byron is tackling the hardest footrace on the planet, the Marathon des Sables in the Sahara Desert. According to an article in the Globe, the 155-miler requires runners to carry all their necessities with them during the duration of the race, and only provides them with three gallons of water a day. Byron is doing the race to raise $50,000 for new laptops for the Gardner Pilot Academy in Allston. Check out the video on her below.