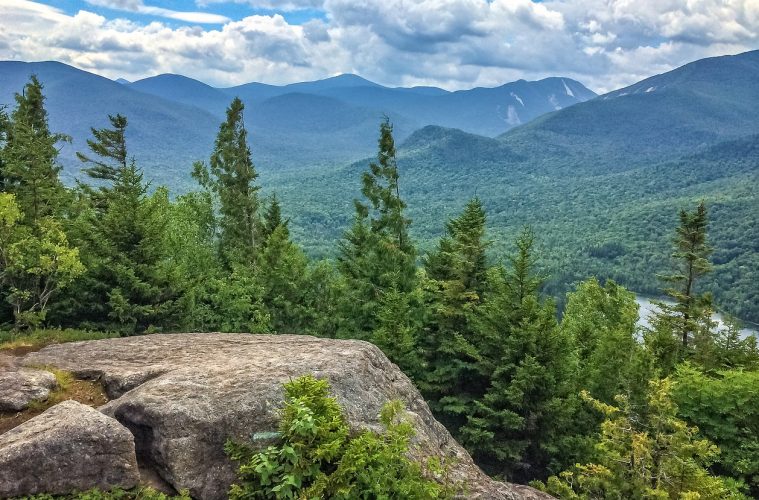 Efforts to relieve overcrowding in ADKs begin to show results

Efforts to curb overuse of the Adirondack State Park’s High Peaks Wilderness Area are beginning to show results, according to a recent study by the Adirondack Council. But the traffic on trails and use of many trailhead parking lots are still well above what they were designed for.

“While total peak use and total annual use are still growing, data shows the Department of Environmental Conservation’s efforts to educate the public and encourage hikers to try new places had a measurable impact, said Adirondack Council Executive Director William C. Janeway. “Peak visitor traffic decreased across the top three destinations in the High Peaks by 3.5 percent. That is progress and we celebrate that, while recognizing that there is still much to do to ensure Wilderness and access are preserved.”

The Council credited the governor for taking the issue of overuse in the High Peaks seriously. They said the governor’s agencies have instituted new public education efforts, started redistributing use and began adjusting parking. The DEC is busy rerouting and rebuilding the worn-out Cascade Trail, and with partners, has stepped up efforts to control overuse on peak weekends. The DEC also appointed a task force to recommend stronger measures, which is expected to report by June.

“The Adirondack Council is pleased that the task force is working toward recommending a comprehensive set of additional strategic actions,” Janeway said. “We still have a long way to go to solve the problem, preserve the Wilderness and have management that ensures communities and the economy benefit.”

Significant new investments will be needed since overuse grew much worse in many places, he said. In places where it got a little better, peak use levels are still twice the state limits established to protect the Wilderness resource.”

Parking lot capacity is different at each trailhead, based on the DEC’s assessment of how many visitors can be accommodated by the lands served by the trail.

Because the DEC’s capacity numbers are based on limiting the number of vehicles, the Adirondack Council counted cars in 2017 and in 2019.

In presentations since 2017, the DEC explained that there are six essential best management practices needed to address wildlands overuse. They are: 1) comprehensive planning, 2) education/outreach, 3) front country infrastructure (parking/bathrooms), 4) backcountry infrastructure (improved/sustainable trails), 5) limits on use at some locations at some times, and 6) additional money/personnel. Wildland management experts say all six are needed.

In some cases, negative impacts of adjusting visitor flow was felt far beyond the High Peaks region. For example, the DEC has encouraged hikers to try the Jay Mountain Wilderness Area in an effort to relieve pressure from the High Peaks Wilderness Area. The five-car parking lot at the Jay Wilderness had a peak of 35 cars in 2017. In the 2019 survey, the number of parked cars was 75.

Surveys of hikers (as opposed to cars) showed similar trends. On Labor Day 2018, the Adirondack 46ers counted 1,216 people climbing the popular Cascade Mountain Wilderness trail. That number rose by 15% to 1,402 in 2019. At the same time, the number of dogs making the trip rose from 49 to 94, or a 92% increase in canine trail use.

The number of hikers using the Adirondack Mountain Reserve/Ausable Club access has grown from under 5,000 in the 1970s to over 27,000, and grew 7% between 2018 and 2019 (link to graph of hiker registration data). At the Adirondack Mountain Club’s Heart Lake property annual use of the popular trail to Marcy dam reached 20,000 in the 1970s and in 2019 the Mountain Club and state estimated that total use through the property reached 100,000.

The Adirondack Mountain Club, DEC and others field trails crews, but they can’t keep up with the work. An assessment found over 130 miles of trails just in the High Peaks region that needed to be redesign and/or rebuilt – current crews are completing a mile or two, per year.

“We understand and agree with the DEC’s decision to redirect visitor traffic so that the High Peaks Wilderness is not loved to death,” said Janeway. “But that alone won’t solve the overuse problem. Many places have no active educators or stewards and need trail work. The solution has to be comprehensive and Park-wide, as the problem is expanding across the Park. We applaud the Governor for proposing funding for more trail crews and shuttles to help address overuse.”