Other than the soothing sound of a distant flowing stream, there was dead silence. I was camped alone on my first night of a four-day, 38-mile backpack through the mountains of Grafton Notch in western Maine. Deep in the woods, I pitched my tent at Knoll’s Camp Site, which was just lightly used. There was no privy yet, not even a fireplace. All day I had met one person, and she was a volunteer doing trail work.

It is easy to find a sense of solitude and welcome lonesomeness on one of New England’s less-traveled trails, the Grafton Loop Trail. Given the weather forecast — cool temps and deep blue skies were predicted for most of the next four days — I eagerly anticipated the western-style vistas from wind swept summits, remote woodlands and hiker camaraderie that was sure to come.

This 38-mile trail, by connecting to an 8-mile section of the Appalachian Trail (AT), forms a loop encircling Grafton Notch in western Maine, near the village of Bethel. Aside from the AT portion of the loop, the Grafton Loop remains largely undiscovered, as the trail has only been fully open since 2007.

The trail follows the ridges along both sides of Grafton Notch, crossing Route 26 twice, once on the north end of the loop and once on the south end. This makes it possible to complete the entire loop as one three- to four-day trip, or over the course of two weekends. The trail has several campsites, all purposely situated at least a good half-day hike from the road. 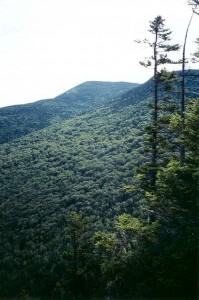 Apart from Baldpate Shelter, which receives heavy use due to its location on the Appalachian Trail, one can fine absolute solitude at every campsite, especially on the western portion of the loop south of Old Speck Mountain. The trip involves plenty of climbing, but rarely do you reach significant altitude. There are just three peaks on the route that reach over 3,500 feet.

During my AT thru hike in 2006, I was taken by the wildness and remoteness of western Maine’s mountains. When I later discovered that a trail was in the works to form a loop through those mountains and permitting an escape from the crowds typical of the AT, I knew I would have to hike it. I finally set out on the Grafton Loop Trail on a cool, crisp morning early on Labor Day Weekend 2007. I left the trail’s parking lot around 8:30 a.m. and quickly entered the woods. The trail climbs steadily, reaching the sub-alpine summit of Pleasant Mountain within a couple hours. Aside from some large clear cuts in the valley on the other side of this mountain, the trail remained in pristine woods. By about 5 p.m. I reached Knoll Camp Site. This camp site, like all others on the Grafton Loop, was located off a short side trail and consisted of several widely-spaced tent sites. The soft breezes, chirping birds, and distant stream were the only sounds to be heard.

Day Two of my hike was a dream. I got an early start out of the camp site and, for a couple miles, the trail paralleled a gently flowing stream. Then some prolonged climbing over several hills ensued. After a steep climb I topped out around mid-day on the wide open windswept summit of East Baldpate, where the Appalachian Trail section of the hike starts. From this 3,800-foot peak the views were stunning. Mountains rippled out to the horizon in all directions. The whole scene was underlain by an endless carpet of dark, green forest dotted by lakes. In fact, the ninth edition of the AMC Maine Mountain Guide says that this peak offers some of the best views of the western Maine mountains and lake country. Being early afternoon, I had plenty of time to relax on this peak as my destination for the night was Baldpate shelter, only a couple miles away.

Baldpate Shelter is on a short side trail off the Appalachian Trail just a couple miles from Route 26. It gets a lot of use and there was a full house when I stayed there. I had the opportunity to hear many stories of the exploits of the northbound AT hikers that had stopped there for the night.

A night at Baldpate Shelter is typical of a stay at any other shelter along the Appalachian Trail. Should you arrive as early as mid-afternoon, you will most likely be alone, as I was. I passed some time by gathering wood and birch bark and lighting a fire. People always arrive in the late afternoon and early evening and they always enjoy a campfire. Mice are native residents at nearly every shelter; keep that in mind when you stow your gear. As well as hearing about various adventures along the trail, you can always count on hearing stories about food. What the hikers are having for dinner, what they had at the last town, and where their next re-supply will be. The beverage of choice, particularly for the under-30 crowd, is usually beer. And they are either drinking it, talking about it, or dreaming about getting it.

Day Three was perhaps the hardest day of the trip. After an easy descent to Route 26 along the AT, there was a long and relentlessly steep climb of nearly 2,700 feet over three miles to the 4,180-foot summit of Old Speck. After a relaxed break on the summit, I picked up the Grafton Loop Trail again and descended, fairly steeply in places. In three short miles I reached my destination for this evening, Slide Mountain Campsite. This was a very nice camp site located again off the main trail. There was a privy, a separate cooking area complete with a steel bear box, and at least three widely spaced tent sites. There was scarcely a sound to be heard at this site.

After breaking camp early the next morning, I walked for several hours in total isolation and undisturbed woodlands. In time I ascended back to the alpine and sub-alpine zone on Sunday River White Cap. This was perhaps the most spectacular outlook on the entire trail. Despite its relatively low elevation of 3,300 feet, this alpine peak offers outstanding views. As I sat on the summit with crystal clear blue skies above, the view from west to east included the White Mountains of New Hampshire, the Mahoosic Range into Maine, all of Grafton Notch and its mountains, and the mountains east and north into Maine. A wild and wooded tableau surrounded me. Three to four more hours of hiking from this remote windswept peak were all that was needed to descend to the low elevation hardwood forests and back to Route 26, which I followed for about half a mile back to my car around mid-afternoon.

In roughly four days I had experienced all the rewards of a classic northern New England mountain hike. Northern hardwood forests, spruce fir forests, arctic windswept summits with endless views and a solitude and remoteness that is increasingly rare in this corner of America. Considering that weather conditions where ideal for hiking and that this was Labor Day Weekend, the amount of solitude found on this hike was remarkable. Yet there were also human contact and friendly conversations. All in all, this was an ideal early- to mid-fall hike that provided me some of western Maine’s finest scenery. ●

David Mills has hiked throughout New England, as well as in the Alps and Rocky Mountains. He has a degree in Environmental Studies and is a student member of the Outdoor Writers Association of America. He lives in Concord, New Hampshire.