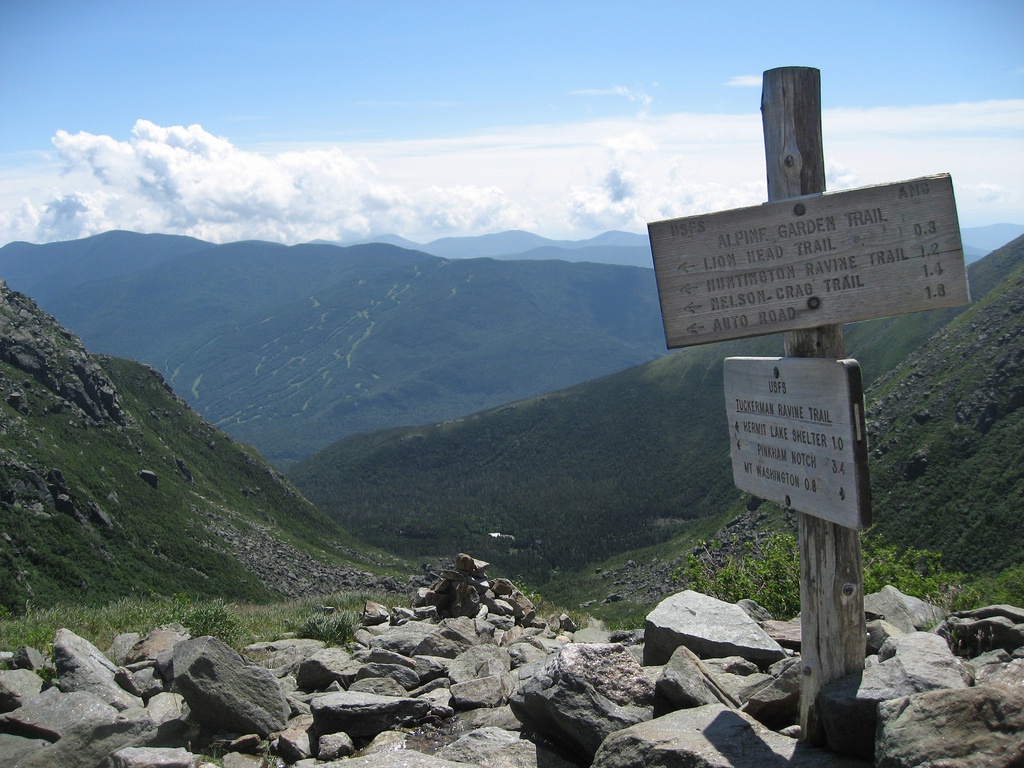 A view of the Tuckerman Ravine Trail where it intersects with the Alpine Garden Trail. (David Smith/Flickr Photo)

A father and daughter had to be rescued on New Hampshire’s Mount Washington Tuesday night as they attempted a summit hike they previously completed 40 years ago.

New Hampshire Fish and Game conservation officers received a report of a hiker having difficulty making it up to the summit of Mount Washington on the Tuckerman Ravine Trail Tuesday night around 7:45 p.m. Officials said  a call came in from a concerned family member requesting help for her father, who was in his mid-seventies and was having a difficult time making it to the summit. The hiker was with her father and trying to help him, but when her cell phone battery died, she left him and went to the summit building looking for help.

The hikers, identified as Carl Bergeson, 77, of Ocala, Florida and his 51-year-old daughter Krista Brousse of Kankakee, Illinois, were trying to complete a summit hike they previously did 40 years ago.

The information provided to authorities stated that 77-year-old Bergeson was approximately a half-mile below the summit on the Tuckerman Ravine Trail and could not physically continue up to the summit due to exhaustion. Also, both hikers reportedly had very little gear and were not prepared for the elements on the summit of Mount Washington, which was 54 degrees Fahrenheit and 24 MPH winds.

A call back number for Brousse was provided and several calls were made in an attempt to verify the hikers’ condition and to determine their exact location, but all calls failed to connect.

A rescue response was initiated with a member of Mount Washington Summit State Park, and two conservation officers responding to the summit and hiking down the Tuckerman Ravine trail in an attempt to locate the exhausted hiker.

An initial search of the trail failed to locate Bergeson. A second sweep was conducted and this time he was successfully located at roughly 9:30 p.m., well off to the north of the Tuckerman Ravine Trail and not far from the parking lot. Bergeson was cold and tired but otherwise uninjured. The rescue crew provided him with food, water and warm clothing and assisted him up to the summit building. From there, both Bergeson and Brousse were relayed back down to the Pinkham Notch Visitor Center where they had started from earlier in the day.

Both hikers had packs with some gear, but they did not have a headlamp or flashlight, which reportedly contributed to their call for help. Additionally, conservation officers said both hikers had underestimated the time and effort it would take to complete a hike to the summit of Mount Washington.