The following are highlights of search and rescue missions conducted by New York Department of Environmental Conservation forest rangers between June 19 and June 25, 2017.

Town of Windham
Greene County
Rescue: On June 22 at approximately 6:30 p.m., DEC Central Dispatch received a call about two lost hikers in Elm Ridge Wild Forest. The male and female hikers, both 74 years old, received assistance from another hiker who helped to get the pair to the main trail. Forest Ranger Christine Nelson responded, signaled for the subjects by whistle, and located the pair on a side trail. Once located, the two hikers were walked out to the Peck Road trailhead in good condition.

Town of Schroon
Essex County
Rescue: On June 25 at 8:33 a.m., Essex County 911 transferred a call from the wife of an injured man on the summit of Pharaoh Mountain to DEC Ray Brook Dispatch. The injured 29-year-old man slipped and fell on a rock, twisting his ankle. Three Forest Rangers, an Assistant Forest Ranger, and State Police Aviation responded. Due to the remote location and incoming stormy weather, the injured man was hoisted from the summit and taken to the Schroon Lake Airport. Schroon Lake EMS transported him to the hospital. 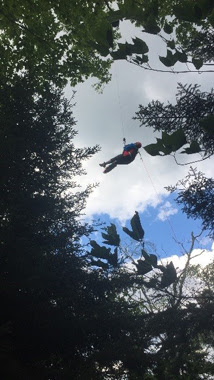 Town of Lexington
Greene County
Rescue: On June 25 at 2 p.m., Central Dispatch was contacted by Greene County 911 concerning an injured hiker on West Kill Mountain in Hunter-West Kill Wilderness Area. The hiker was reported to have a lower leg injury. Five Forest Rangers responded along with members of the Lexington and Jewett fire departments. A New York State Police helicopter out of Newburgh was used to conduct a hoist operation. The subject was then transferred to a waiting ambulance and transported to an area hospital.