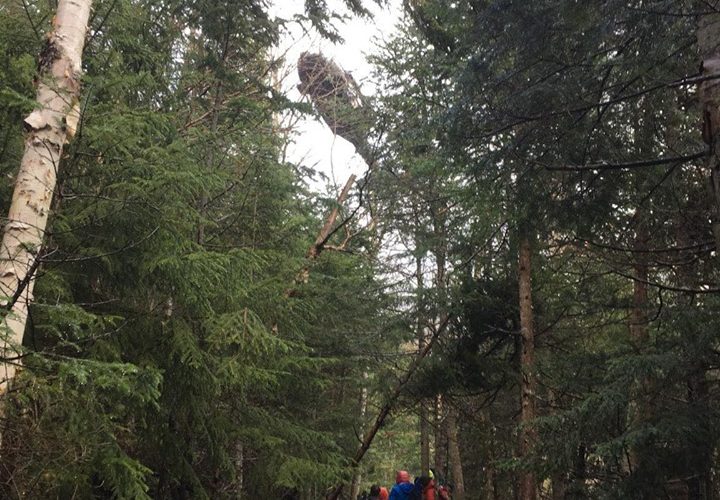 A helicopter was needed to rescue two hikers who became fatigued while hiking in deep snow on New Hampshire’s popular Falling Waters Trail this morning.

At around 7 p.m. yesterday (May 20), New Hampshire Fish and Game officials were alerted to two hikers requesting assistance on Mount Haystack in Franconia.

The two hikers were identified as Mark Chavez, 36, and Amanda Chavez, 32, a husband and wife from Marietta, Pennsylvania.

The couple was hiking up the Falling Waters Trail to the summit of Mount Haystack and continued a short distance towards Mount Lincoln. After hiking in deep snow for several miles without snowshoes the couple became fatigued and called 911 for assistance.

The couple was able to hike back down the Falling Waters Trail to the Shining Rock Spur Trail on their own. While resting at that junction, Amanda went unconscious for unknown reasons and it was determined she would not be able to hike out under her own power and would have to be carried out the rest of the way.

Chavez was carried for several miles before a helicopter from the New Hampshire Army National Guard was used to extract Chavez. The helicopter made one attempt to make an extraction, but the low visibility due to fog made it impossible to do so.

A small window of opportunity presented itself when the fog lifted, and the helicopter crew was able to reach the rescue team’s location and extract her at 8:04 a.m. this morning.

She was flown directly to a local hospital in Lebanon, where she is being evaluated and treated.

Fish and Game officials want to remind people planning to enjoy New Hampshire’s White Mountains that trails are packed with feet of snow and ice which requires winter equipment. Many water crossings are at extremely high levels and are dangerous to cross. Weather may appear warm and comfortable at lower elevations during daytime, but temperatures will be seriously colder as you gain elevation or as the sun sets.