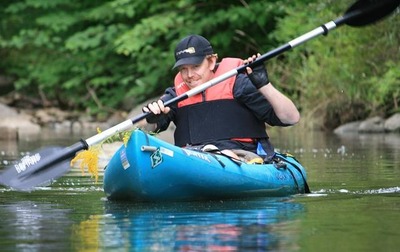 In June of 2010, a mountain-biking accident at Burke Mountain left David Wieselmann with a broken neck and a spinal cord injury at the C7 vertebra, paralyzing him from the chest down.

Before his accident, Wieselmann would often bike 40 to 70 miles a day around the Northeast Kingdom of Vermont, until the snow would fall – and then each day for him was about skiing. Given the nickname “Turbo,” Wieselmann’s life was about constant activity and pushing his body to the limit.

Today, he finds himself confined to a wheelchair, facing numerous physical risks. Paralysis is not as simple as just being unable to move body parts. Major health risks are involved, such as osteoporosis, blood pressure problems, heart disease, muscle spasticity and calcification of muscles. And, as is the case for anyone with such physical issues, exercise is the remedy.

Because of his previous lifestyle of physical activity, Wieselmann’s body has been especially responsive to physical activity, and he’s shown significant recovery through therapy. He’s been given access to a cutting-edge spinal cord injury rehab program in Canton, Massachusetts, called Journey Forward.

Now, his friends are coming together to raise funds for him to cover his living expenses while he undergoes rehabilitation. And they are looking for any contributions, no matter the size. It all helps.

To contribute to Wieselmann’s recovery, and to learn more about him, visit his Sharing Counts site here.