A skier who reportedly suffered a broken femur while skiing in the Adirondack backcountry was rescued by forest rangers last week.

On Tuesday, February 22 at 6:30 p.m., rangers received a report of a 911 call from the injured skier, who reportedly suffered a leg injury at the Griffin Brook Slide on Snowy Mountain, roughly a mile into the woods. The skier, a 36-year-old man from Hamilton, New York, had reportedly hit a frozen branch under the fresh powder and broke his femur. 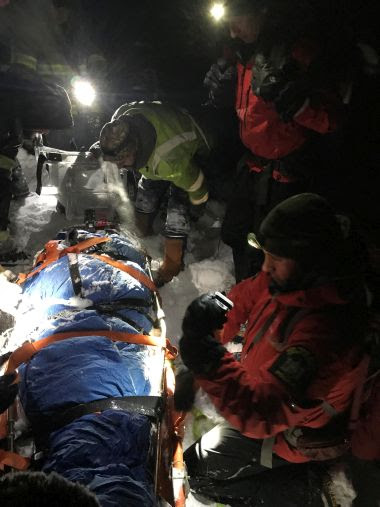 Rescuers work to help a skier who broke his femur in the Adirondack backcountry. (NYDEC Photo)

A New York forest ranger responded to the scene along with the Indian Lake Fire Department. The ranger took a snowmobile up the unmarked trail and snowshoed the rest of the way, reaching the skier by 8:42 p.m.

In addition to the broken femur, the skier was reportedly suffering from mild hypothermia and the onset of frostbite.

The ranger stabilized the injury and warmed the subject using heat packs and sleeping bags, and worked with the Indian Lake Fire Department to package the skier in an insulated vapor barrier and sled.

Once the rescuers reached the road, the skier was turned over to Indian Lake EMS for transport to Glens Falls Hospital shortly before 11 p.m.