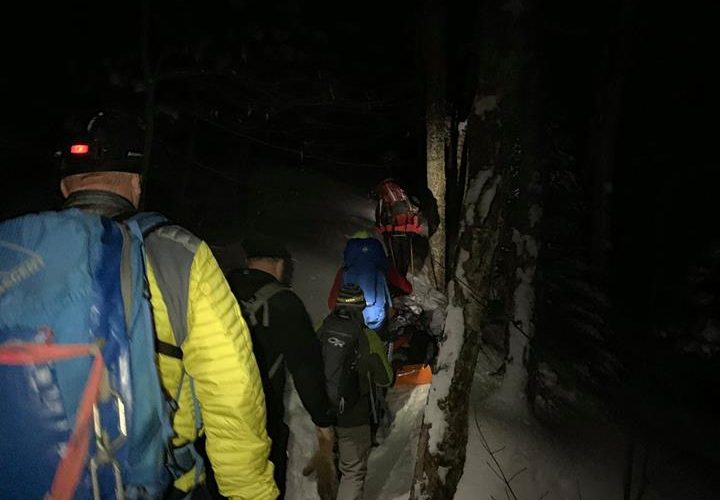 Two injured hikers were rescued by search and rescue crews in separate incidents in New Hampshire on Tuesday.

According to New Hampshire Fish and Game officials, they received a report of the first injured hiker at around 10:30 a.m. The hiker had reportedly suffered a knee injury and was wet after falling in a brook.

Jay Dulski, 28 of Boston, Massachusetts, and Thomas Miller, 31 of New Canaan, Connecticut, had been on a multi-day hike in the Tripyramid Mountains off of the Kancamangus Highway in Albany, New Hampshire.

On Monday, March 4, Jay injured his knee but was able to continue hiking. Officials said both men were prepared for the difficult winter and deep snow conditions. On Tuesday, March 5, they were working their way out of the mountains on the Downes Brook Trail. At a point nearly 3.5 miles from the trailhead, Jay broke through the ice along Downes Brook and was submerged to the waist. The men were carrying a satellite phone and were able to send a message for help.

Along with conservation officers, members of the US Forest Service, Mountain Rescue Service and Pemigewasset Valley Search and Rescue Team responded. Rescuers first made contact with Tom, who had been hiking out to assist rescuers. He said Jay was in a sleeping bag and in good condition.

Rescuers reached Jay just before 3 p.m. They were able to warm him and – having packed the trail – Jay was able to walk out 2.5 miles to a waiting snow machine, which transported him the last mile to the trailhead. He arrived at the trailhead shortly after 6:30 p.m. and left with Tom in his own vehicle.

In the second incident, officials were notified of an injured hiker on the Hancock Notch Trail in Lincoln, New Hampshire at around 3 p.m. Fish and Game conservation officers and volunteers from the Pemigewasset Valley Search and Rescue Team responded to the scene.

According to members of the Pemigewasset Valley Search and Rescue Team, the victim was a 16-year-old female student at the Holderness School who fell while hiking and injured her hip. She was unable to continue hiking on her own.

She was part of a group of student hikers from the Holderness School in Holderness, New Hampshire, who were accompanied by several adult hikers from the school. The group was on a multi-day camping and hiking trip when the injury occurred.

The rescue team was able to use a device designed to slide a victim along the snow-covered trail to get her to the trailhead. The rescue team arrived at the trailhead at 7:35 p.m. and the victim was transported by the Linwood ambulance service to Spear Memorial Hospital in Plymouth for further evaluation.