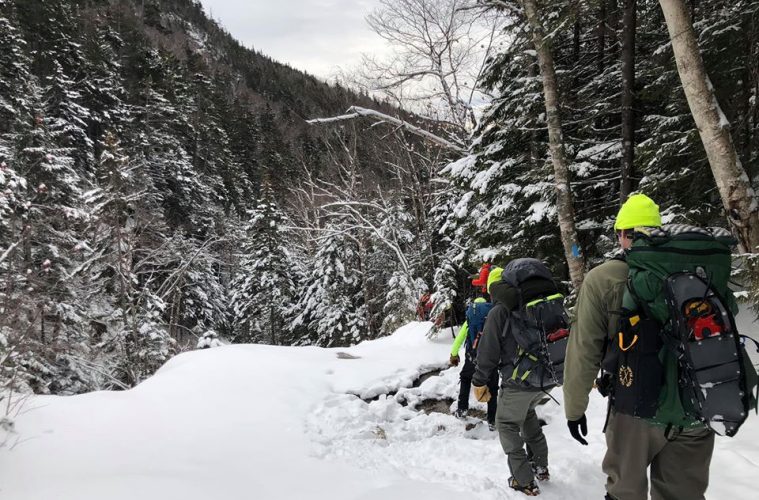 Rescuers head back down the Falling Waters Trail after receiving word the hiker was rescued. (Pemigewasset Valley Search and Rescue/Facebook Photo)

According to New Hampshire Fish and Game officials, the hiker, Matthew Gunby, 36, of Meredith, New Hampshire, was climbing to the summit of Mount Lafayette yesterday, but was turned back by high winds and blowing snow.

During whiteout conditions near Mount Lincoln, Gunby reportedly lost his way on the ridge trail and fell roughly 70 feet down a chute on the west side of Mount Lincoln, commonly referred to as Lincoln’s Throat.

Officials say he injured his arm or shoulder in the fall, which somehow led to the loss of his pack.

Gunby called 911 after the fall. Conservation officers and volunteers from local search and rescue groups searched throughout the night and into the early morning hours for Gunby. However, the initial GPS coordinates from his 911 call did not provide an accurate location, and the search was suspended at 3 a.m.

On Thursday morning, with rescuers about to resume the search, Gunby made another call to 911, which provided a more accurate GPS location.

At roughly 8:30 a.m., seven members of the Pemigewasset Search and Rescue Team headed up the Falling Waters Trail with two conservation officers while a half dozen more rescuers waited at Lafayette Place Parking for a possible drop off by the National Guard helicopter on the summits of Lincoln, Lafayette and Haystack in order to search for the missing man if the helicopter was not able to find and extract him. Cloud cover made conditions difficult on the ridge, necessitating the back up team hiking up in case the helicopter was unsuccessful for any reason. Fortunately the helicopter crew found and extracted Gunby around 10 a.m.

In addition to the injuries from the fall, Gunby reportedly suffered cold related injuries to his hands and feet due to the overnight.

Gunby was dropped off at the Cannon Mountain tram parking lot by helicopter and then transported by the Franconia Life Squad to Littleton Regional Hospital.