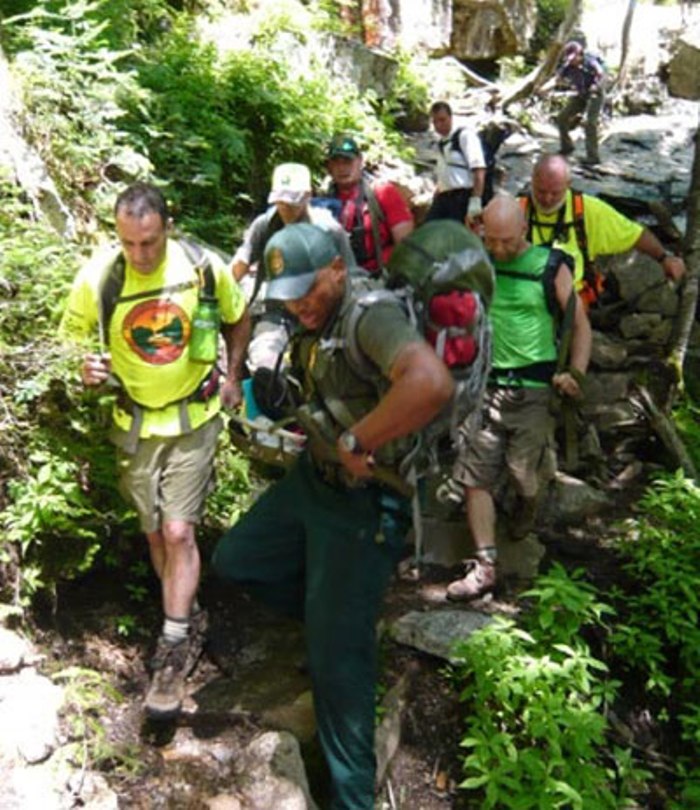 During the first incident, Andrew Koert, age 53, of Groton, Massachusetts, slipped and fell approximately 10 feet while ascending the Falling Waters Trail on Haystack Mountain in the town of Franconia.  As a result of the fall, Mr. Koert sustained multiple injuries and was unable to walk or bear any weight.  Initially, passerby hikers assisted Koert and requested assistance of emergency personnel.  After receiving the call, a Conse

rvation Officer with N.H. Fish and Game hiked approximately 1.2 miles up the Falling Waters Trail into Koert’s location. The hiker’s injuries were assessed and he was packaged into a litter for transport down the mountain. Conservation Officers, members of the Pemigewasset Valley Search and Rescue Team and U.S. Forest Service personnel all participated in the rescue by carrying the litter to the base of the mountain to an awaiting Lincoln/Woodstock Ambulance. The rescue concluded at 2:30 p.m., and shortly thereafter Koert was transported to Littleton Regional Healthcare for further medical attention.  Koert was an experienced hiker and was equipped with appropriate gear for a summer day hike.

During the second incident on July 12, Al Diaz, age 28, of Roslindale, MA, and several hiking companions started hiking at 10:30 a.m. and were attempting to complete the Falling Waters Trail, Greenleaf Trail to Bridle Path Loop, but missed the Greenleaf Trail cutoff and continued to hike more than a mile along the Garfield Ridge Trail. At approximately 8:45 p.m., Diaz began experiencing medical issues and requested assistance from emergency personnel. At approximately 10:15 p.m., members of the Appalachian Mountain Club’s (AMC) Greenleaf Hut arrived and were able to provide Diaz with additional clothing, fluids and food. At 12:45 a.m., after resting along the Garfield Ridge Trail for over 2 hours, members of AMC were able to get Diaz moving towards the summit of Mt. Lafayette. At approximately 1:15 a.m., Fish and Game Conservation Officers met up with the group four-tenths of a mile below the summit of Mount Lafayette on the Greenleaf Trail. After a brief medical assessment, Diaz, his hiking companion and the rescuers continued down the trail to the Greenleaf Hut. Diaz spent the night at the Greenleaf Hut with other members of his hiking party and hiked down the Bridle Path to the Lafayette Place Trailhead, arrived at approximately 11:30 a.m. today. Conservation Officers continued to hike down the mountain and concluded the rescue at 4:30 a.m. Fish and Gameofficers noted that while the group did have most of the gear necessary for a summer day hike, they did not have any prior experience hiking in the White Mountains and were not fully aware of the difficult terrain.

During a third incident on July 12, George Kulz, age 43, of Cumberland, RI., and his hiking party arrived at the summit of Mount Washington after all facilities on the summit were closed. Once on the summit, the group received inaccurate guidance from other tourists that descending the mountain along the Cog Railway was the fastest route down the mountain.  Kulz and his hiking party began to descend the mountain along the Cog Railway at 6:45 p.m. At approximately 8:45 p.m., Kulz requested the assistance of emergency personnel to assist them down the mountain. After receiving the call, Conservation Officer Matt Holmes provided verbal instructions to the hikers to assist them in a self-rescue, as the group did have all the appropriate gear for a summer day hike. At approximately 10:00 p.m, a Coos County Sheriff’s Deputy in the area spotted lights descending the Cog Railway, but the lights turned out to be from an unrelated hiking party.  Ultimately, Conservation Officer Holmes located the hiking party at approximately 1:40 a.m., roughly one mile from the base of the Cog Railway. All individuals involved in the rescue arrived safely at the base of the mountain at approximately 2:20 am.