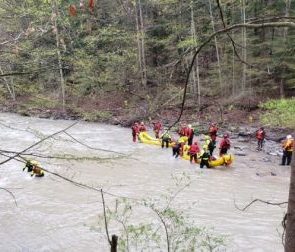 On Wednesday, May 1, rangers received a report of a 911 call at 8:43 p.m. A Brooklyn hiker on a cell phone reported that a 19-year-old male in their group was repeatedly slipping and falling after descending Algonquin Peak.

The caller’s 911 coordinates placed the group on the trail approximately .9 miles from Marcy Dam. The call was lost and dispatch was unable to reach the hikers via text.

Forest rangers responded with an all-terrain vehicle via the Marcy Dam truck trail to intercept the hiking party at Marcy Dam. When the subjects were not found at Marcy Dam, rangers went up the trail toward Avalanche Camp with negative results.

State Police, who had also received calls from the hikers’ family and friends, provided a second cell number for the group, and rangers contacted the group by 10:36 p.m.

The hikers said they believed they were just over a mile from the Adirondak Loj past Marcy Dam. Ranger James Giglinto caught up to the group on the trail at 11:39 p.m. The subjects reached the Loj at 12:02 a.m. and declined further medical care after being assessed by Ranger Giglinto.

The hikers had mistakenly taken a longer route after leaving Algonquin, and the subject having difficulty did not have suitable gear for the trip.

In an incident on Saturday, May 4, rangers received a 911 call on a cell phone from a hiker who was lost while hiking back from Bum Pond in the William C. Whitney Wilderness.

The 62-year-old male from Bushkill, Pennsylvania, went on a hike to Bum Pond from Sabattis Road and successfully reached the pond on the lightly marked trails. However, while coming back, the hiker became disoriented and called for forest ranger assistance after realizing he was lost.

Through questioning by Ray Brook Dispatch and based off his last known point and direction of travel, rangers established that the hiker was along the shore of Little Tupper Lake.

Two  rangers proceeded to the Whitney Headquarters with a boat for an efficient response. The rangers quickly arrived at the trail coordinates, located the hiker in good condition, and returned him to his vehicle.

In a second incident on Saturday, May 4, rangers received a report of four lost hikers in the Zoar Valley Multiple Day Use Area at around 10 p.m.

Two females, one from Silver Creek and one from Forrestville, and two children became disoriented while hiking. The hikers contacted 911 and their coordinates were relayed to the rangers.

A regional swift water team was deployed, but was unable to reach the group due to rocks in the stream. Rangers John Kennedy and Nathan Sprague then proceeded to hike in with crews on each bank to pinpoint the hikers’ location.

The group was located early Sunday morning and taken out by raft. All were in good health. EMS met the hikers at the parking lot, where they were evaluated and released.