One dies, several others rescued from raging NH rivers

May 19, 2017
Rescuers work to save a man stranded along the swollen Pemigewasset River in New Hampshire. (Campton-Thornton Fire Rescue Photo)

After one person drowned and at least a half dozen others had to be rescued this week, authorities are warning people to be cautious around New Hampshire’s rivers, where cold water temperatures and high water levels caused by heavy rains and snow melt have created dangerous conditions.

A woman reportedly drowned Wednesday evening while swimming at Lady’s Bathtub, a popular swimming spot along the East Branch of the Pemigewasset River in Lincoln, New Hampshire.

Also on the Pemigewasset, on Thursday evening, rescue crews from local fire departments were called to rescue a man at Livermore Falls in Campton. The man had reportedly slid down some rocks and became stranded on the edge of the river, which authorities said was “raging” due to rains the day before.

Rescue crews used a rope system to lower down to the man and then raise him up over a cliff to safety. 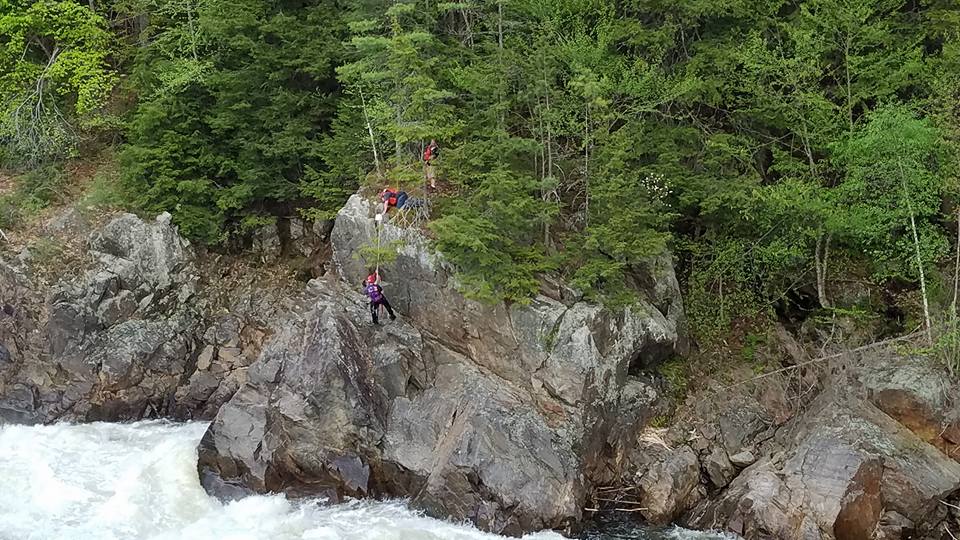 Rescuers hoist a man over a cliff to safety on the Pemigewasset River. (Campton-Thornton Fire Rescue Photo)

On the Merrimack River on Wednesday evening, authorities rescued five teen kayakers who became stranded on a line of buoys. According to an article on UnionLeader.com, rescuers said the high water level and swirling currents created some of the toughest conditions they’ve ever operated in. The teens were reportedly inexperienced and unprepared for the conditions.

Officials said the Merrimack is roughly three feet above normal. While rivers may look flat, the water at this time of year is moving very fast. When combined with cold water temperatures, people can find themselves in trouble in a hurry.