New York forest rangers had to navigate steep, icy conditions and endure frigid temperatures on Saturday night to rescue an injured backcountry skier in the Catskills. 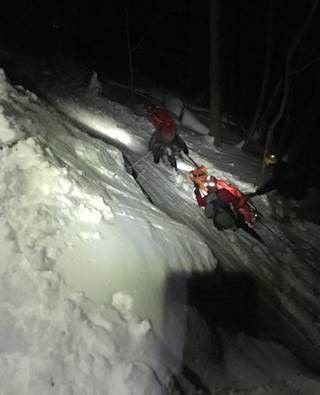 According to New York Department of Environmental Conservation officials, rangers received a report of an injured backcountry skier at around 5:15 p.m on Saturday, February 2. The skier had sustained an unstable lower leg injury after skiing a steep section of the Devil’s Path on the Hunter-West Kill Wilderness Area.

Eight forest rangers responded to the Notch Lake Trailhead off County Route 214. The rangers hiked nearly a mile up to the skier, where several volunteers, Hunter Police Department officers, and a New York state police officer were already with the patient. While one ranger administered first aid, two others began setting up a steep angle rope system with a hand line for the evacuation.

The injured skier was hypo-wrapped and packaged in a sled by rangers and volunteers, and was then evacuated using a steep angle rope system.

The rangers and volunteers worked through steep, icy conditions with frigid temperatures throughout the night and were able to get the injured skier out by 1:30 a.m. the next morning.

The skier was taken to Columbia Memorial Hospital by Hunter Ambulance.