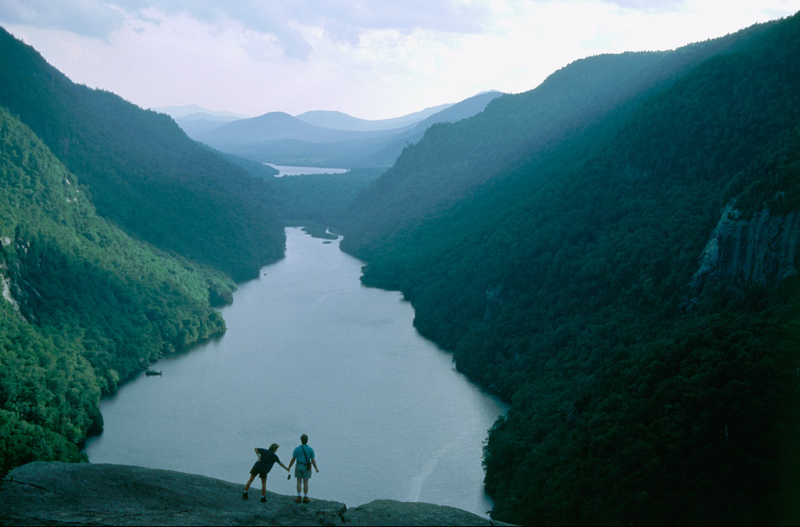 The following is an account of recent search and rescue missions performed by forest rangers in New York’s Adirondack State Park, from July 19 to July 26.

Essex County
Town of North Elba
High Peaks Wilderness
Distressed hiker: On July 19, 2015 at 10:50 p.m., DEC Ray Brook Dispatch received a call from a hiker requesting assistance for her companion who was in distress near Marcy Dam after hiking Mt. Marshall. The 45-year-old woman from Baltimore, MD suddenly became ill. Ray Brook Dispatch texted the reporting party, who informed them that the pair were 10 minutes from the Yellow Trail in Algonquin, close to the Adirondack Loj. DEC Forest Rangers met the women on the trail and provided fluids to the woman in distress. The Rangers escorted her to the ADK Loj and put her into an ambulance, which took her to AMC Lake Placid for treatment. The incident concluded at 12:30 a.m. on July 20.

Town of Chesterfield
Private Land
Lost minors: On July 21, 2015 at 8:25 p.m., DEC Ray Brook Dispatch received a call from a home owner on Butternut Pond reporting his neighbor’s two teenage boys from Mont-Hillaire, QC, CA had been missing for the past six hours. At approximately 2:30 p.m. the teenagers went for a walk, but had not yet returned. DEC Forest Rangers and volunteers from the Keeseville Fire Department responded to the location. At 9:02 p.m., a responding Forest Rangers located the pair walking the road in good condition. The teens hiked around Butternut Pond and became lost on the network trails. They hiked approximately 12 miles before coming out onto State Route 9N in the Town of Chesterfield. The Ranger transported the teens back to their camp and to their parents without further incident. The incident concluded at 10:30 p.m.

Town of Keene
Giant Mountain Wilderness
Injured hiker: On July 25, 2015 at 2:15 p.m., DEC Ray Brook Dispatch received a report of an injured hiker at the Junction of Roaring Brook Falls. The 39-year-old woman from Latham, NY was alert and making her way down the trail with the assistance of friends. DEC Forest Rangers responded to Giant Ridge Trailhead and encountered the group 1.25 miles up the trail. They evaluated the woman, administered first aid and escorted her out. She told them she would seek medical attention on her own. The incident concluded at 5:30 p.m.

Town of Keene
High Peaks Wilderness
Distressed hiker: On July 25, 2015 at 3:45 p.m., the Keene Valley Fire Department requested assistance from DEC Forest Rangers for a dehydrated woman at Rainbow Falls. Rangers and members of the Keene Valley Fire Department escorted the woman out through the Adirondack Mountain Reserve Property to a waiting Keene Valley Ambulance. The Ambulance transported her to Elizabethtown Hospital for treatment. The incident concluded at 4:30 p.m.

Town of North Elba
High Peaks Wilderness
Distressed hiker: On July 25, 2015 at 3:40 p.m., DEC Ray Brook Dispatch received a call from the Wright Summit Steward reporting a 56-year-old female hiker from Paris, France in medical distress near the Wright and Algonquin Junction. The Wright Summit Steward conducted a medical assessment, while a DEC Forest Ranger headed to the scene. Once the Ranger arrived, they requested a helicopter and placed it on standby while they organized a hoist operator and advanced medical care. However, the woman’s condition improved after a short time and she managed to walk with assistance. An assistant Forest Ranger then transported her to her car where she declined any further medical treatment. The incident concluded at 7:00 p.m.

Town of North Elba
High Peaks Wilderness
Injured hiker: On July 26, 2015 at 5:35 p.m., the Marcy Dam Interior Outpost caretaker contacted DEC Ray Brook requesting assistance for an injured female hiker. The 26-year-old woman from Elkhart, IN fell in Avalanche Pass. A DEC Assistant Forest Ranger assisted her to Marcy Dam where another Ranger waited on a Utility-Terrain Vehicle. The DEC Ranger transported the woman to the Adirondack Loj at 6:53 p.m., where she declined further medical treatment.

Hamilton County
Town of Inlet
Moose River Plains Wild Forest
Lost hikers: On July 26, 2015 at 2:06 p.m., Herkimer County 911 contacted DEC Ray Brook Dispatch reporting two lost hikers on Black Bear Mountain. The 20-year-old women from Rome, NY were hiking on ski trail when they decided to head to the top. Two DEC Forest Rangers located the women at 3:57 p.m. after following GPS coordinates provided by 911. The Rangers then escorted the women out to the trailhead.

Herkimer County
Town of Webb
Fulton Chain Wild Forest
Injured hiker: On July 26, 2015 at 2:11 p.m., Herkimer County 911 contacted DEC Ray Brook Dispatch requesting assistance for a 70-year-old woman from Slingerlands, NY who sustained a leg injury while hiking Bald Mountain. Three DEC Forest Rangers and an Assistant Ranger responded with New York State Police, Town of Webb Police Department and Old Forge Rescue Squad to carry the hiker out. An ambulance met them at the trailhead and transported the woman to a hospital in the Utica area. The incident concluded at 4:22 p.m.