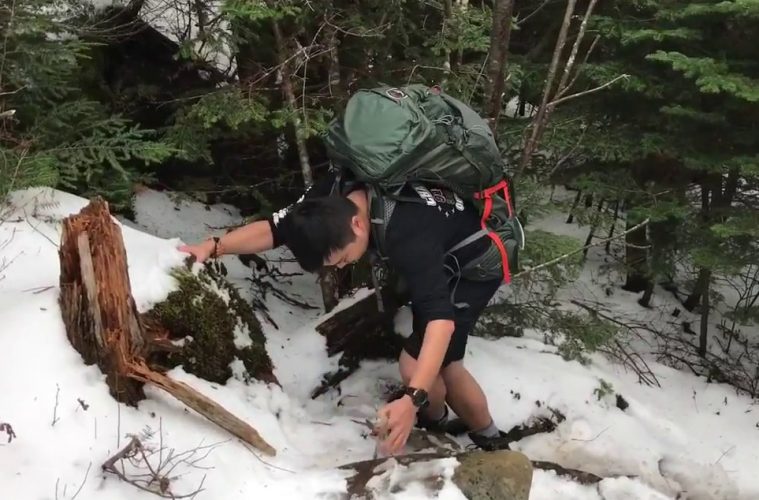 Among those rescued were two hikers in the Hunter Mountain-West Kill Wilderness Area. The hikers were on Devil’s Path – one of the most demanding trails in the Northeast. Officials said the two were inadequately prepared and became cold and fatigued.

In another incident, a hiker had to be rescued after suffering a hip injury coming down Slide Mountain and later becoming unconscious.

Read about these and other incidents in the DEC Forest Ranger Highlights from January 7 to 13.

Town of North Elba
Essex County
Wilderness Search: On Jan. 8, a 26-year-old Rochester woman called DEC’s Ray Brook Dispatch to request help descending Mount Marcy in the Eastern Adirondacks High Peaks Wilderness Area. She was hiking alone and lost the marked trail during a snow squall that delivered white-out conditions. Essex County 911 identified the subject’s cell phone coordinates and Forest Ranger Jim Giglinto instructed her on how to get back on the trail. Due to weather conditions, Ranger Kevin Burns hiked to the woman’s location to assist her off the mountain. Within three hours, Burns located the hiker, assessed her condition, and began escorting her out. She was back at the Adirondak Loj parking lot without any injuries within seven hours of her call.

Town of Colton
St. Lawrence County
Assist to Snowmobiler: On Jan. 9, St. Lawrence County 911 transferred a call to DEC’s Ray Brook Dispatch regarding a stranded snowmobiler in the town of Colton. The 55-year-old Childwold woman was snowmobiling alone on a county trail and was unable to extract her machine from deep snow. Cell phone location coordinates were not available from her initial call. As her phone was about to lose power, Dispatch texted her and directed her to re-contact 911 so her location could be determined. This information allowed Forest Ranger Adam Baldwin to find her within 10 minutes of entering the trail with his snowmobile. With his assistance, the snowmobiler continued her ride to her home without injury or further need of assistance.

Town of Lexington
Greene County
Wilderness Rescue: On Jan. 10, New York State Police reported to Forest Rangers that two hikers on Devil’s Path in the Hunter Mountain-West Kill Wilderness Area needed assistance returning the five miles back to where they started their hike. Five Forest Rangers responded and located the 22- and 24-year-old Rockland County men within an hour. Rangers escorted the inadequately prepared hikers back to their vehicle. Although both hikers were cold and fatigued, neither required medical treatment.

Town of Wells
Hamilton County
Two Snowmobile Accident Rescues: On Jan. 12, Forest Rangers David Kallen and Andrew Lewis along with Environmental Conservation Police Officer (ECO) Peter Buswell assisted Hamilton County Sheriff’s Deputies to locate and evacuate a 54-year-old Schenectady woman involved in a snowmobile accident in the Speculator Tree Farm easement lands. After preparing the injured woman for evacuation by snowmobile sled, the Rangers brought her to a waiting ambulance for further treatment and transport to Nathan Littauer Hospital in Gloversville. As the three officers cleared this incident, they responded to another accident four miles away. In this case, a 14- and 41-year-old snowmobilers from Hadley collided, causing both operators to be ejected and injured. Rangers and Speculator EMS personnel carried the injured youth to an ambulance while the older subject was evacuated by an all-terrain vehicle. Both snowmobilers were transported to Nathan Littauer Hospital with non-life-threatening injuries.

Town of Shandaken
Ulster County
Wilderness Rescue: On the afternoon of Jan. 13, two hikers in the Slide Mountain Wilderness Area reported to 911 that they needed assistance descending Slide Mountain. A subsequent call indicated both hikers were cold and one had suffered a hip injury. Later that day, another hiker reported to 911 that the injured hiker was now unconscious. Thirteen Forest Rangers responded to the scene in an attempt to rescue the group that evening or prepare for a helicopter evacuation at first light. By 8:30 p.m., Rangers reached the injured hiker and found three additional hikers who needed immediate evacuation due to the onset of hypothermia. As these hikers were led off the mountain, the injured hiker was treated for mild hypothermia and secured in cold weather gear. By 10:30 p.m., the three mobile hikers were safely out of the woods and returned to their vehicles. At first light on Jan. 14, Rangers determined the injured hiker could hike out with their assistance, and a helicopter rescue was no longer needed. By 9 a.m., the 23-year-old New Jersey man was off the mountain, evaluated by emergency medical technicians, and released to his own care.