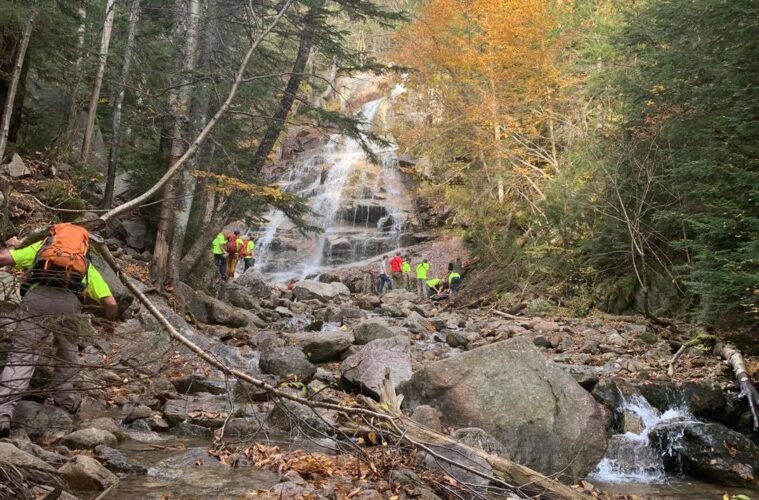 Rescuers respond to Cloudland Falls along the Falling Waters Trail in New Hampshire to help an injured hiker. (NH Fish and Game Photo)

A 14-year-old girl was seriously injured Saturday when she fell down a popular waterfall in New Hampshire’s White Mountains.

New Hampshire Fish and Game officials say they received a report at 3:12 p.m. on Saturday, October 10, of a hiker who had suffered a fall down Cloudland Falls along the Falling Waters Trail in Lincoln.

The 14-year-old from Yarmouth, Maine, was hiking with family and friends when she tried to climb an area of the falls and fell nearly the entire length of the waterfall, resulting in serious-but-non-life-threatening injuries.

Volunteer rescuers responded from the Pemigewasset Valley Search and Rescue Team as well as conservation officers with the New Hampshire Fish and Game Department to the Falling Waters Trail to perform first aid and transport the youth down the trail.

Rescuers quickly decided she needed to be carried in a litter, and the carry-out party was able to navigate the treacherous areas of the trail without further incident.

The rescue reached I-93 in Lincoln at 5:35 pm and the youth was transported by Linwood Ambulance Service to Speare Memorial Hospital in Plymouth for further medical treatment.