This winter, a group of hikers braved snowy trails, subzero temperatures and remote wilderness to complete the first ever winter thru hike of New Hampshire’s challenging 165-mile Cohos Trail. 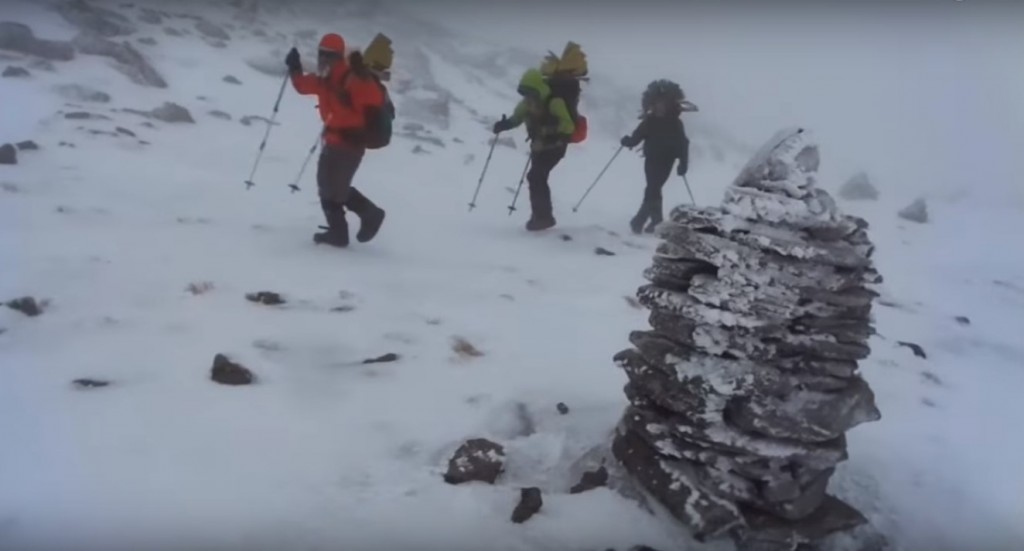 For four hikers trying to do what had never been done before, there was no easing into their challenge. They faced their moment of truth on February 3 — just Day Two of what they hoped would be an 11-day thru-hike of New Hampshire’s 165-mile Cohos Trail, a remote, rugged wilderness trail from Crawford Notch to the Canadian border. Completing the hike in February would make them the trail’s first known winter thru-hikers.

But it was almost over before it really began. On the first day, snowshoeing with heavy backpacks over a challenging, unpacked snowy trail had proved difficult and they hadn’t made the mileage they expected. In the Presidentials on Day Two, they were pummeled by harsh conditions. Their plan to summit Washington was foiled by extreme winds and poor visibility, and they were turned back. On Monroe, winds of roughly 90 miles-per-hour knocked them around. Sleet and snow made it difficult to see. And they broke two trekking poles.

“That was the scariest thing I’ve ever done in my life,” said Matt “Gator” Miller, 24, of Wilmot, New Hampshire. “That was sketchy.”

They were battered, shaken and still had at least nine days of remote hiking left to go. But, as they descended back into the treeline to continue along the Cohos, they began to feel confident about their chances.

“We knew that the scariest part was behind us,” said Collin Hart, 22, of Swanzey, New Hampshire, who goes by the trail name ‘Waylon Jennings.’ “It would take something drastic like a serious injury to prevent any of us from completing the hike.”

There would be no such setbacks. Nine days later, right on schedule, the group completed their trek at the Canadian border, becoming the first to ever thru hike the Cohos Trail in the winter.

Winding through the remote wilderness of northern New Hampshire, the area surrounding the Cohos Trail is said to have more moose than people. The trail traverses more than 30 mountain summits, several wildlife refuges, seven waterfalls, flumes and wild rivers. It has 10 shelters and it features the kind of solitude you can’t find on a White Mountain AMC trail. That’s precisely what attracted Miller, Hart and their hiking partners (and Collin’s brothers) Ian “Willie Nelson” Hart, 26, and Ryan “Kris Kristofferson” Hart, 24, both of Swanzey, New Hampshire.

“The Cohos Trail caught our eye because of its remoteness along with none us had ever hiked much farther north in New Hampshire than Mount Washington,” said Collin. “We wanted to test ourselves mentally and physically in the winter months and we knew the Cohos Trail would be a perfect trail to help us do that.”

The idea for the trip was born in December, while the group was hiking the Sunapee, Ragged Kearsarge Greenway, a 75-mile loop of hiking trails in central New Hampshire. They started talking about how great it would be to have a trail like Vermont’s Long Trail in New Hampshire. Collin mentioned the Cohos. Having already hiked extensively in southern and central New Hampshire, they realized that by hiking the Cohos plus another short connecting trail they would have completely hiked from New Hampshire’s southern border to its northern border. The adventure was on.

They decided to take on the Cohos in winter. They’d never done a long distance winter hike, and they wanted to try it. They had no idea that no one had ever thru hiked the Cohos in winter before until they spoke with members of the Cohos Trail Association about the trail. They were told their hike would be a first.

“Really it was just an added bonus,” said Collin. 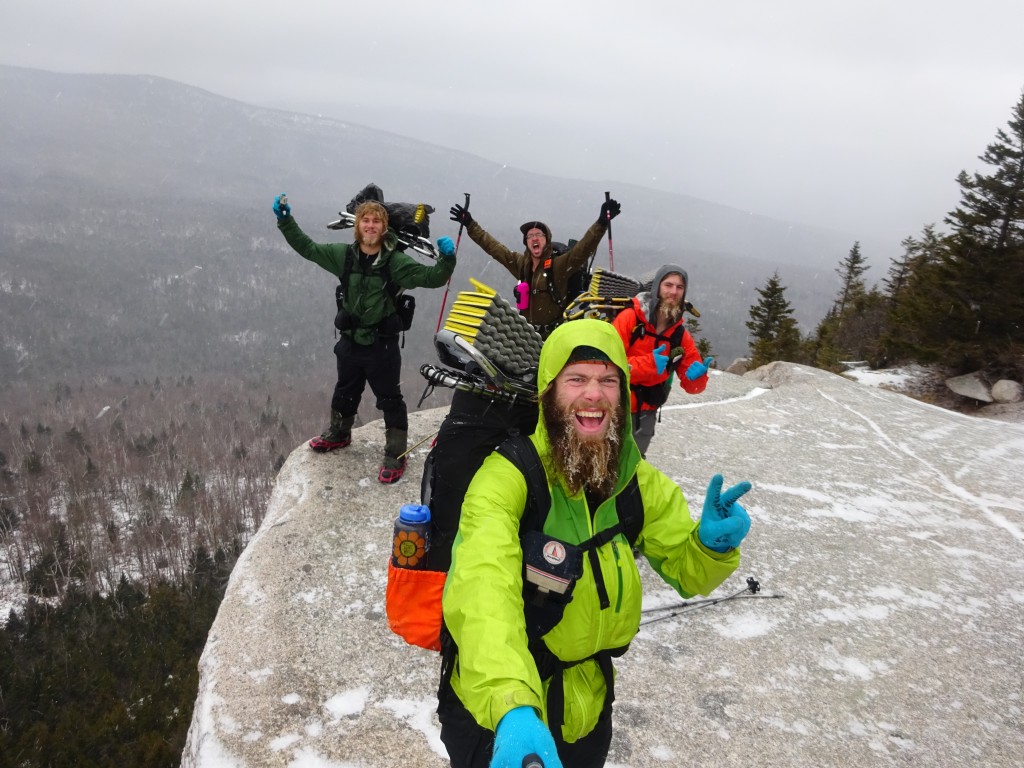 While they hadn’t done long winter treks before, the group of hikers were no strangers to long distance hiking. All of them had completed the Appalachian Trail in the summer of 2015. It was on the AT that the brothers had met Gator, who had also previously thru-hiked the Long Trail. The brothers had hiked the Monadnock Sunapee Greenway, a 50-mile trail in southern New Hampshire, in addition to the whole group hiking the Sunapee, Ragged Kearsarge Greenway.

But a long hike in winter presented new challenges. They had to pay special attention to their gear, especially their sleep systems, clothing and footwear, to make sure they were protected from extreme cold. They chose routes that best avoided dangerous situations such as icy river crossings. They also had to consider how to deal with unpredictable trail conditions and how to make sure they reached their resupply points on time.

Besides the challenges of cold weather, winter means shorter days for hiking. On most days, the group would wake around 5:30 in the morning and hike in the dark for a short time until it became light. They would then try to have camp set up around 4:30 when it got dark again. Most nights they were in their sleeping bags for 13 hours. Icy, snowy trail conditions were also a huge factor. When trail conditions were good with little or no snow, they made great mileage. But when the trails were icy or had deep, unpacked snow, it would drastically slow them down.

During days, they had to find a good hiking speed and pay particular attention to regulating their body temperature while hiking.

“You have to find the right pace to be able stay warm, but also not burn yourself out too early in the day,” said Collin. “You have to keep breaks short to avoid having to layer up to stay warm.”

A relatively new trail, the Cohos can also be a challenge to follow. Besides the winter conditions, poor blazing and blowdowns caused the group to lose the trail several times, sometimes hiking for half an hour not knowing if they were on the trail or not.

“In the end we had to push hard to finish on the exact day we thought we would,” said Collin.

The view from Table Rock looking down into Dixville Notch. (Ian Hart Photo)

The group acknowledges they were helped by this winter’s warm weather. But that’s not to say it was warm and toasty during their trip. Most days were well below freezing. The second to last day was minus 17 in the morning and never got above freezing. The next day it was minus 5 when they started and then proceeded to get colder.

But despite the hardships, the crew enjoyed some amazing experiences on the trail. They saw two moose and they enjoyed amazing solitude and scenery — mountain summits, lakes, waterfalls, meadows and forests covered in fresh snow.

While this group is the first to thru hike the Cohos in winter, they probably won’t be the last. To future winter thru hikers, they recommend bringing a well-thought-out pack and that hikers test their gear beforehand. To prepare for the cold, they tested themselves before the trip with an overnight on Mount Moosilaukee. Temperatures dipped to minus 20 that night and the conditions above treeline were similar to the worst they’d experience on the Cohos. Satisfied with their gear and performance, they embarked on their thru hike.

They caution that hikers should stay updated on weather conditions, since they can change rapidly. They recommend having realistic and flexible daily mileage goals. Since hiking mistakes in winter can turn dangerous in a hurry, they say to always err on the side of caution. And, finally, remember to have fun.

“Enjoy every moment on the trail,” said Collin, “and take time to notice the little things.” 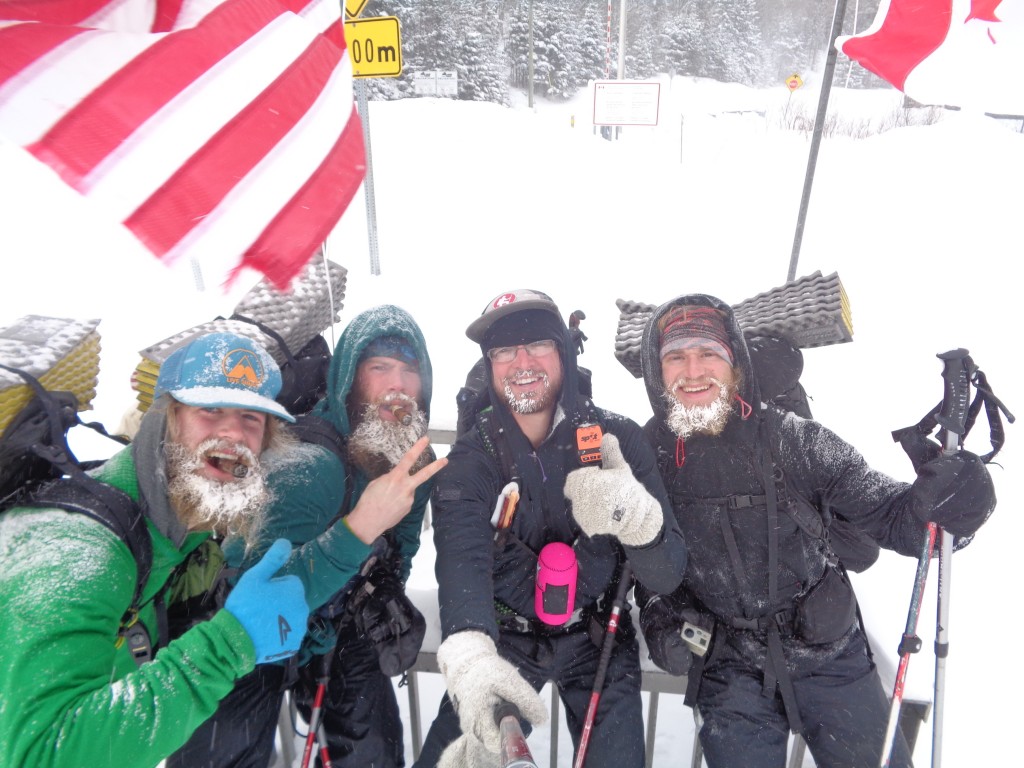 The group completing their thru hike as they arrive at the Canadian border. (Ian Hart Photo)