New York officials have closed a popular hiking trail because of dangerous conditions.

The Bluff Trail at Chimney Bluffs State Park has been closed due to erosion on its jagged mud cliffs, according to an article on DemocratandChronicle.com. 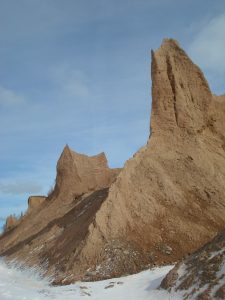 Closure signs have been posted at trailheads in the park, located on the southern shore of Lake Ontario.

The trail will likely need to be re-routed, which officials said probably won’t happen until 2019.

The bluffs are the park’s biggest draw. The mile-long trail hugs the rim of the bluff and offers spectacular views of the jagged, chimney-shaped spires from above.

Read more about the closure of the Bluff Trail at New York’s Chimney Bluffs State Park.