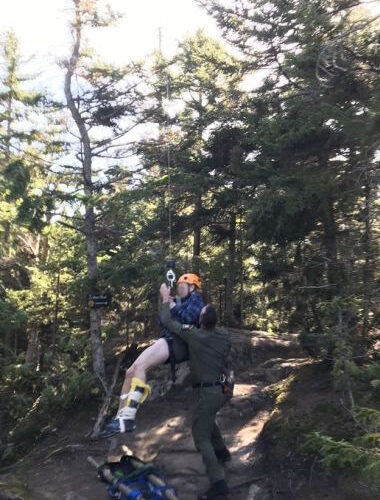 Multiple hikers who were not carrying any lights other than their cell phones had to be rescued in New York last week.

In one incident in Keene, New York on September 20, Essex County 911 transferred a call to DEC’s Ray Brook Dispatch at 9:42 p.m. from a group of hikers reporting two members of their party were overdue from hiking Giant Mountain. They were last seen at 6:45 p.m. on the trail headed towards Roaring Brook Falls and reportedly only had food and their cell phones with them.

Two forest rangers responded to assist. At 10:15 p.m., a ranger arrived on scene and determined the two women from Syracuse were last seen at the ladder section below the junction of the ridge trail. Neither hiker had any lights and their cellphones were dead.

At 11:10 p.m., the ranger found the hikers approximately 1.5 miles from the trailhead. He provided them with headlamps and escorted them back down the mountain where they met the second ranger, who was searching another section of the trail. At 12:01 a.m., the hikers were reunited with their group.

In another incident in Hunter, New York on September 25, Greene County 911 contacted Central Dispatch at 7:48 p.m. regarding a call they received from two lost hikers.

The caller’s information was relayed to a forest ranger who contacted the hikers. The hikers were panicking because their cell phone was their only source of light and it was running out of power.

The ranger advised the hikers to stay where they were and to text the coordinates of their current location and their vehicle description. The ranger then plotted the coordinates on a map, putting their location near the intersection of the Devil’s Path and the Overlook Trail.

A second ranger called in to assist located the 39-year-old man and 37-year-old woman from New Jersey approximately three quarters of a mile from the trailhead.

The ranger gave them flashlights and escorted them out of the woods. They made it back to their vehicles at 10:45 p.m.

Below are highlights of the many rescues conducted by New York forest rangers last week.

Town of Shandaken
Ulster County
Wilderness Rescue: On Sept. 19 at 10:10 p.m., DEC’s Central Dispatch received a call from Ulster County 911 reporting a 69-year-old hiker from Pine Plains who became separated from his party while hiking down Wittenberg Mountain on the Red Trail towards the Woodland Valley Parking Lot. Forest Rangers Martin and Franceschina responded to assist. At 11:45 p.m., Ranger Martin located the hiker just off the trail and escorted him out of the woods. They arrived back at the trailhead at 1:30 a.m.

Town of Keene
Essex County
Wilderness Rescue: While hiking on her day off on Sept. 20, Forest Ranger Temple encountered a hiker from Florida who sustained a lower leg injury near the summit of Indian Head on the Adirondack Mountain Reserve. Ranger Temple contacted DEC’s Ray Brook Dispatch at 1:45 p.m. requesting additional Ranger assistance as well as New York State Police (NYSP) Aviation due to the severity of the injury to the 53-year-old woman’s leg. Six Forest Rangers responded to her location, along with NYSP Aviation, and at 3:30 p.m., the injured hiker was hoisted into the helicopter and transported to a local hospital for medical treatment. Resources were out of the woods and clear of the scene at 4:15 p.m. 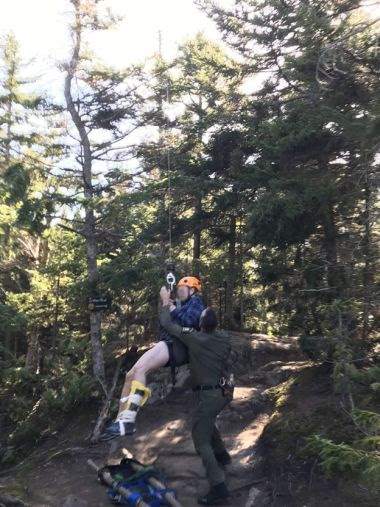 A hoist rescue conducted near the summit of Indian Head in the Adirondacks. (NYDEC Photo)

Town of Wells
Hamilton County
Wilderness Rescue: On Sept. 21 at 1:20 p.m., Hamilton County 911 transferred a call to DEC’s Ray Brook Dispatch reporting a 69-year-old hiker from Albany fell and struck her head on the Auger Falls Trail. Forest Ranger Miller along with Lt. Kerr and the Town of Wells Fire and EMS responded to assist. Once on scene, Forest Rangers and EMS walked the hiker out of the woods to the trailhead where she was transported to a local hospital for medical treatment. Resources were clear of the scene at 2:30 p.m.

Town of Shandaken
Ulster County
Wilderness Rescue: On Sept. 21 at 1 p.m., Forest Ranger Lt. Ashida heard over the radio that a 38-year-old injured hiker off Woodland Valley Campground contacted Ulster County 911 and needed Forest Ranger assistance. The hiker from Stone Ridge fell below Cornell Crack in Slide Wilderness and believed he broke his leg just above the ankle. Forest Rangers Slade and Kreft responded to Parish Field in Phoenicia to set up a command post and develop a plan for extrication. Due to the hiker’s remote location, a request for New York State Police (NYSP) Aviation was also made. At 3 p.m., Ranger Slade was picked up by NYSP Aviation and was inserted about a third of a mile from the injured hiker’s location. Once at the hiker’s location, Ranger Slade assessed his injuries while Ranger Kreft coordinated the second insertion of Rangers and rope gear, while also planning for a possible carryout with assistance from Rangers Ellis, Pries, Dawson, Martin, and Franceschina. Due to the low cloud cover and terrain, the hiker needed to be packaged in a litter and carried to a lower point to be hoisted out. Rangers Jahn and Franke were then inserted with a litter and additional gear necessary for the carry out. Once the hiker was packaged in the wheeled litter, Rangers transported him 250 vertical feet down to the extraction point. At 6:30 p.m., the hoist was completed and the hiker was flown to Kingston Airport where he was met by a Mobile Life Support Services Ambulance. He declined additional medical transportation and was driven by his mother to a local hospital. Rangers packed up the excess gear and proceeded back down the mountain. Resources were clear of the scene at 12:36 a.m. Many thanks to NYSP Aviation, NYSP Special Operations Response Team (SORT), Phoenicia Fire Department, Shandaken EMS, Shandaken Police Department, and Catskill Mountain Search and Rescue for helping with this mission.

Town of North Elba
Essex County
Wilderness Rescue: On Sept. 23 at 3:32 p.m., DEC’s Ray Brook Dispatch received a call from a 74-year-old hiker from New Jersey advising that he became disoriented coming off of Wright Peak in the High Peaks Wilderness and was not sure how to get back to the Adirondak Loj. At 4:58 p.m., Assistant Forest Ranger (AFR) Leff found the hiker at the junction for Wright and Algonquin mountains. The hiker thought he was hiking Wright Peak, but was actually on Algonquin. While on the summit, a passing group of hikers pointed him in the right direction. At 7:20 p.m., AFR Leff escorted the hiker out of the woods and back to the Adirondak Loj.

Town of North Elba
Essex County
Wilderness Rescue: On Sept. 25 at 1:18 p.m., DEC’s Ray Brook Dispatch received a request for Forest Ranger assistance for a 53-year-old man from Boston, New York, with a hip injury on Algonquin Peak. Assistant Forest Ranger Leff and Marcy Dam Caretaker Engel responded to the location, along with Forest Rangers Mecus and Curcio with a six-wheeler. Once on scene, Rangers performed a medical evaluation, found the injury to be non-weight bearing, and requested NYSP Aviation for extrication. At 4:50 p.m., NYSP Aviation arrived on scene with Forest Ranger Benzel acting as crew chief and the hoist mission was completed. The injured hiker was transported to a local hospital and all units were clear of the incident at 7:15 p.m. Link to DEC video of the rescue on DEC’s YouTube page .

Town of Warrensburg
Warren County
Wilderness Rescue: On Sept. 25 at 1:45 p.m., DEC’s Ray Brook Dispatch received a request for Forest Ranger assistance for a 60-year-old man from Lake Luzerne who rolled his ATV on Wilderness Way off Vielle Pond Road. Forest Rangers Kabrehl and Quinn responded along with the Warrensburg Fire Department and EMS. At 3:15 p.m., Rangers, fire department personnel, and the rider’s friends packaged him up and carried him out of the woods to an awaiting ambulance to be transported to a local hospital.

Town of Fort Ann
Washington County
Wilderness Search: On Sept. 25 at 9 p.m., Environmental Conservation Police Officer (ECO) Krug advised DEC’s Ray Brook Dispatch that Washington County 911 contacted him requesting assistance with a search for a 37-year-old man and his 12-year-old daughter. The pair from Fort Ann were overdue from riding an ATV. ECO Krug contacted Forest Ranger St. Claire who was responding to assist him and ECO Goodrich with the search. The riders were located roadside by a passing motorist around 11:30 p.m. A patrol unit picked them up and brought them back to the command post at 12:24 a.m.