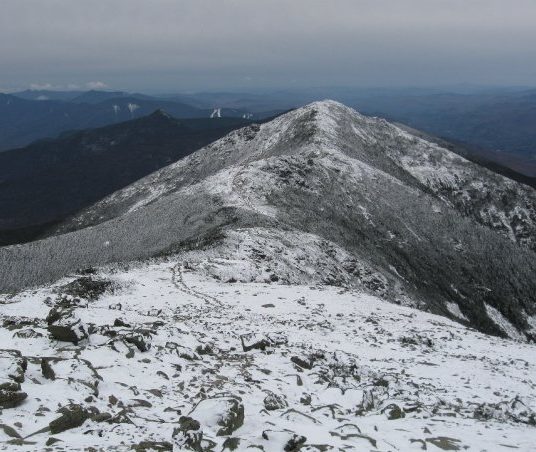 New Hampshire conservation officers received a report shortly after 3 p.m. on Thursday, December 5 that two female hikers had called 911 and were stranded atop Mount Lafayette (5,249 feet) in Franconia. The two hikers reported they were unable to locate the trail to descend from the summit and were in extremely high winds and whiteout conditions. Visibility was only a few feet.

The hikers spent the next hour looking for the rock cairns that mark out the Greenleaf Trail to tree line. Not wanting to get off trail and into a worse predicament the pair returned to the summit and took shelter behind some rocks. A rescue effort was initiated at 4:10 PM.

A team of conservation officers and volunteers from the Mountain Rescue Service responded to the trailhead. Weather above tree line was forecast to remain bad through the night with winds at 60 miles per hour, temperatures in the mid-teens, and poor to no visibility.

Shortly before 6 p.m., the first team departed from the trailhead to ascend the 4-mile hike to the summit of Mount Lafayette. Every hour or so, contact was made with the pair by cell phone. Exposed to the elements, the pair of hikers were starting to suffer early signs of hypothermia.

At 9:30 p.m., a small team from Mountain Rescue Service made contact with the stranded hikers while the remainder of the rescuers had taken shelter at AMC Greenleaf Hut to await word if more supplies and equipment were needed. The small team was able to quickly get the pair moving and headed back down the mountain through what was estimated as 40-60 mph winds and blowing snow.

The group was aided by GPS units in finding their way successfully back to tree line. The group arrived at Greenleaf Hut a little after 10 p.m. and at 11:30 p.m. everyone had arrived back at the trailhead safely.

The two hikers were identified as 24-year-old Catherine Courtemanche and 54-year-old Nathalie Beaudet, mother and daughter from Sherbrook, Quebec. The pair had departed at 9 a.m. on December 5 with the plan of hiking the Falling Waters/Bridle Path Loop, a hike they have both completed many times.

They were well equipped with winter clothing and equipment, but lacked some of the navigational equipment such as a compass or gps that would have assisted them in navigating thru the whiteout conditions. They had checked a weather report for the area and knew they would be hiking in windy conditions but didn’t realize that they would face sustained whiteout conditions when they summited Mount Lafayette. The two hikers were thankful for the rescue effort and credit them with saving their lives as they felt they certainly wouldn’t have survived the night. After resting for a short while the two were able to drive back home.