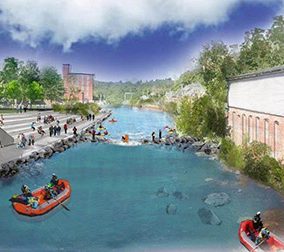 Plans for a whitewater park in Franklin, New Hampshire have suffered a setback.

According to an article on ConcordMonitor.com, the $1.5 million in state funds for the park proposed last month by New Hampshire Governor Chris Sununu has been cut from the state budget.

Organizers of the proposed Mill City Park want to create an outdoor community park for Franklin that will use outdoor recreation to promote economic development in the area.

Plans for the proposed park include creating a whitewater park along a stretch of the Winnipesaukee River that drops more than 7.7 feet over a 1.25-mile section, offering prime whitewater rafting. Plans also include a mountain bike pump track.

The one-time investment of $1.5 million would have gone a long way toward reaching the roughly $2 million to $2.5 million still needed by organizers to complete the park.

The New Hampshire State Legislature removed the funds, with representatives saying funds should be going toward mental health resources, property tax relief and dealing with the opioid epidemic.

In a press release, Marty Parichand, Executive Director of Mill City Park, expressed disappointment at the loss of state funding.

“I am saddened to hear that the whitewater park funding has been voted out of the budget,” wrote Parichand. “This is not just a park. It is our sustainable solution to grow and improve.”