Cold nights, cans of Natty Light and episodes of Survivorman have led to many great trip ideas. Bushwacking up Maine’s Speckled Mountain may or may not have been one of them. 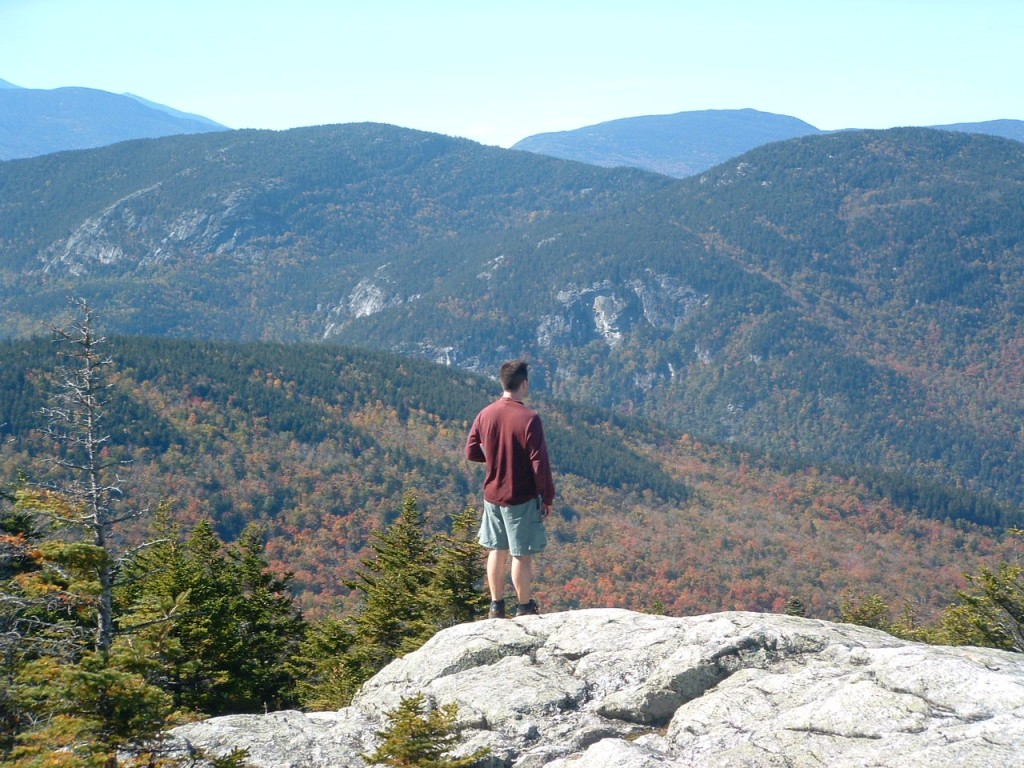 Our trip into the meatgrinder began on a cold winter night in Lewiston, Maine. The winds were whipping in five directions and there were rumors of a frozen corpse somewhere on Russell Street. My friend Greg and I were sitting on a couch in a function hall he was being paid to monitor, sipping Natural Light and watching Les Stroud prance around the desert on “Survivorman.” Stroud was cooking a ground squirrel with a metal wire and some plastic tubing when Greg spoke up, already slurring his words a little and drooling from the eyes.

I took out a piece of paper and started scribbling:

Two hours later, the floor was littered with beer cans and the list was affixed to the coffee table by a 10-inch hunting knife. It was 40 lines long and contained all we would need to survive an indefinite time in the wilderness: fixed blade knife, strike-anywhere matches, compass, tarp, rope, tea candles. Bouillon cubes. It made perfect sense.

Over the next several months we gathered the items. We bought partially expired iodine tablets at a good price from L.L. Bean, as well as gasoline camp stoves, axes and folding spades. The weirder things we had to get from Wal-Mart, like the tubing and wire, and curved needles for stitching wounds.

Once we had everything there was little to do but wait for the mud to come out. Greg turned a little strange while we waited for winter to end, constantly reorganizing his pack and babbling about terrorists. His plan was to be ready for the next Red Dawn; he was taking this very seriously. I spent my time striking matches on my teeth and starting small fires in strange rooms.

The ground finally thawed in early May after several straight days above 30 degrees Fahrenheit, and we set out for the wilderness. Ours was the Caribou-Speckled Mountain Wilderness, down in the portion of the White Mountain National Forest that pushes over the border into Maine. The wilderness encompasses some 14,000 acres and is named after its two highest points — Mt. Caribou (2,840 feet) and Speckled Mountain (2,906). “Mt. Caribou got its name after two brothers shot the last caribou in the region there in 1854,” says the U.S. Forest Service. “Their names are carved on the top of the mountain.”

Caribou was out of the question — too many ghosts. We would bushwhack up Speckled Mountain, following Willard Brook to the summit then coming back the way we came. And maybe, if we were lucky, we would find the last remnant of some other species, cowering atop a scrub pine or huddled under a boulder. We brought the burlap sack and the meat dehydrator just in case.

It was late Friday evening when we parked the Volvo in a ditch and shouldered our packs, which weighed just under 85 pounds each. We hiked into a clearing by a small brook and hung the tarps. Greg rummaged through his food bag for some canned meats, and I cooked some rice and beans on the gasoline stove. Darkness fell.

After a slow breakfast Saturday morning, we brushed our teeth with Dr. McGillicuddy’s and packed up camp. The air was damp and the ground made odd sucking noises all around us. We shouldered our packs with mean groans and consulted the map — not far to Willard Brook, and from there it was two and a half miles to the summit. Shouldn’t take more than three hours, we figured. It was 10:00 a.m.

At 3:00 p.m. we stopped at a small rock outcropping and sat down. Greg’s throat was hoarse from constantly yelling profanities and my boots were full of blood. I counted 112 cuts on my legs, and started to doubt my decision to wear shorts. We ate a slow lunch — more canned meats for Greg, who was already flirting with the meat sweats, and granola and cheese for me — and scrunched our faces at the map. A mile remained to the ascent, and from the looks of the map it was an ugly mile indeed. The contour lines were so close together they blurred into one. “That will be our death,” I said to Greg. Greg frowned and called me a pussy.

So we pushed on. At times we had no choice but to walk in the brook, slogging upstream like salmon and crawling over moss-covered boulders. The chutes and waterfalls we bypassed by winding through the scrub pine, ducking under the jagged branches and shielding our eyes. At one point I heard a terrible ripping sound and looked down to see a flap hanging off of my self-inflating mattress. It would inflate no more, by itself or by any other means.

Better the Therm-a-Rest than my hip-flesh though, and I smiled at my good fortune. But my mood quickly turned sour when I heard a series of slurs coming from up ahead. Greg had buried his left leg in a sinkhole and was struggling to extract himself. I asked him if he needed help, but he frowned and called me a pussy.

So I sat and ate some jerky while Greg ripped off his pack and tried to wrench himself out of the hole. Once out, he tore through his foodbag and shotgunned two cans of chicken. By now his entire body was trembling, and I knew he was in the full grips of the meat sickness. His brain would be gone in thirty or forty minutes . . .

The trees only got denser as we continued, the branches more crooked, the roots less forgiving. Icicles clung to the sides of boulders. I cracked my toe on a root and bruised my knuckles on a screech owl. Greg started bleeding out of his ear and it occurred to me that either of us might come out of this thing with one fewer sense organ than he started with. Ruptured eardrum maybe, punctured eyeball . . .

So be it. We had gotten ourselves into this mess and now it had taken hold of us, bearing us upwards. It was the thrill of the hike, the burn in the muscles and the fire in the gut. The savage rush of high adventure. I looked at Greg and his eyes were wild, his mouth fixed in a mad grin and his chin wet with spittle. He looked at me like he saw the same kind of face, and nodded in approval. We pushed on.

But the body can only endure so much, and the mind maybe less, and we did reach a quitting point. This was around 5:00 p.m. My legs were jelly and I could barely breathe, and the steepest part of the climb was yet to come. “I’m dead,” I said to Greg. “I say we camp here and finish in the morning.” But Greg would hear none of it. He started yelling and babbling about a test he had to study for. “Either we keep going, or we turn around now,” he said. “I need to be home tonight.” I shook my head; it would be night soon. “We can’t walk this thing in the dark,” I said. “We’ll snap our shin bones for sure.”

“Then we turn around,” said Greg. He was angry, but deep in the fog of his lizard brain I think he knew it was right. We drank some water, cursed the Gods, and turned to descend.

On the way down I could think only of Chinese food. I felt so battered and close to death that only the promise of egg rolls and Budweisers kept my feet moving. I asked Greg what he thought. “Are you kidding?” he said. “I’ve been thinking that same thing for the last hour. I will eat 40 of everything. They will ban us for life.”

Three years have passed since that foul day in the woods of southwest Maine. I am in Tucson drinking myself into a condition and Greg is in the Marines doing God knows what. The other night I called him up and told him I had an idea. “Let’s do the hike again,” I said. “But this time we need to finish.”

“Are you kidding?” said Greg. “I’ve been thinking that same thing for the last two years.” So we mulled over some logistics. Cut packweight to 20 pounds. Don’t bring the rubber tubing. Limit meat consumption. Forget comfort—think only of staying alive.

I haven’t done any bushwhacking since Speckled Mountain. I’ve kept to the trails, where the miles add up quickly and the blood doesn’t drip so freely. I cover good ground, but that’s it — I am merely passing through. I’m not in the woods the way I was on Speckled Mountain, held by the branches and roots, tied to the Earth. I am not involved; I am in my head.

On Speckled Mountain we were in the woods, and our blood was on the ground. We were tuned in, aware, a little insane, in tremendous pain — and when the day was done we had really been somewhere, and the beer tasted like we had earned it. Ж