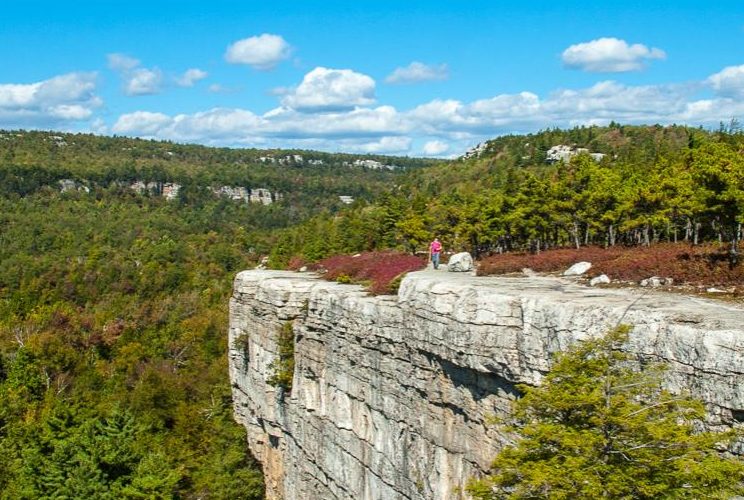 On Thursday, New York forest rangers rescued a hiker who was injured from a 60-foot fall along the Gertrude’s Nose Trail in Minnewaska State Park in the town of Rochester, New York (not to be confused with the city of Rochester).

According to New York Department of Environmental Conservation officials, they received a report of the injured hiker at 12:51 p.m. on Thursday, October 5. Officials said the hiker – a 30-year-old female – had fallen 60 feet into a crevasse next to the cliff face of Gertrude’s Nose Trail. She was reported to be alert and conscious with back and ankle injuries.

The hiker was successfully loaded into a litter and raised by a rope from the accident site. The helicopter traveled to a nearby landing zone in the park, where she was then transferred to Kerhonkson Accord Ambulance and transported to a local hospital for medical treatment. A host of agencies assisted Rangers and NYSP with the rescue mission, including Mohonk Preserve Rangers, Minnewaska State Park Rangers, Kingston Fire Department Special Operations, Accord Fire Department, Kerhonkson/ Accord First Aid Squad, and Mobile Life Support Services.

The following are a list of other search and rescue missions conducted by NYDEC forest rangers recently.

Town of Keene
Essex County
Wilderness Rescue: On September 30 at 4:34 p.m., DEC’s Ray Brook Dispatch received a call from a hiking party on the north side of Mount Colden reporting an 18-year-old female in the group fatigued and unable to walk. Through additional questioning by Rangers and Dispatch, it was discovered that the hiker had a pre-existing heart condition, that if taxed, causes circulation issues, fatigue, and an inability to walk. Forest Rangers Robert Praczkajlo and Robbi Mecus responded to Lake Clear Aviation to be transported by helicopter to the incident location. Once the hiker was located, a hoist rescue was performed and the woman from Mechanicville was airlifted to a local hospital for additional medical treatment. The two remaining hikers were supplied with headlamps and continued their hike out to the trailhead.

Town of Webb
Herkimer County
Wilderness Rescue: On Oct. 1 at 7:57 p.m., DEC’s Ray Brook Dispatch received a call from Herkimer County 911 requesting Forest Ranger assistance rescuing a 59-year-old woman from Oneida who became stranded during heavy rains on the cliff ledges on the east side of Bald Mountain. Forest Rangers Matthew Savarie, Gary Miller, and Luke Evans responded and brought gear to execute a high-angle rope rescue. At 8:45 p.m., Forest Rangers located the woman and were assisted by Old Forge and Eagle Bay Fire Departments getting the woman and her dog the few hundred feet back up to the trail, where they were escorted back to the trailhead.

Town of Newcomb
Essex County
Wilderness Rescue: On Oct. 5 at 12:05 p.m., DEC’s Ray Brook Dispatch received a call from a man reporting that his ex-wife was injured while hiking in the Santanoni range. He stated that he received a text message from the woman saying she had fallen and hit her head. She reported bleeding and told him that she was on her way back to the trailhead. Forest Ranger Jamison Martin and Assistant Forest Ranger Brendan Jackson responded to assist. At 2:22 p.m., Forest Ranger Martin advised that they were with the 41-year-old hiker from Red Hook and on their way out. Once back at the Bradley Pond trailhead, they were met by Newcomb EMS, which transported the woman to a local hospital for further medical treatment. All units were clear of the scene by 3 p.m.

Town of Inlet
Hamilton County
Wilderness Rescue: On Oct. 5 at 1:25 p.m., DEC’s Ray Brook Dispatch received a call requesting assistance for a 59-year-old female from Buffalo who dislocated her ankle while descending Rocky Mountain. Forest Ranger Robert Coscomb responded and located the woman, stabilizing her injury. Additional resources were requested. Lt. Scott Murphy, Gary Miller, and Matthew Savarie and members of the Inlet and Old Forge Fire departments arrived to assist. The woman was carried out in a rescue litter to the trailhead and transferred to Inlet EMS, where she was transported to a local hospital for medical treatment.

Town of Webb
Herkimer County
Wilderness Rescue: On Oct. 5 at 1:37 p.m., Herkimer County 911 transferred a call to DEC’s Ray Brook Dispatch advising of a 73-year-old man from Central Square with an unstable knee injury on the Bald Mountain trail. Lt. Scott Murphy arrived on scene along with Old Forge and Eagle Bay fire departments and headed up the trail, locating him at 2:12 p.m. a quarter of the way up. The man was placed in a rescue litter and rope rescue gear was used to lower him down 100 feet of rock face. At the trailhead, the injured man was evaluated by Old Forge Ambulance and he refused further medical care.

Town of Humphrey
Cattaraugus County
Emergency Response: On Oct. 5 at 4 p.m., Forest Ranger Wayne Krulish was flagged down by a motorist who stated that his girlfriend was stung by a bee and was experiencing a severe allergic reaction. The patient was experiencing difficulty breathing with shallow respirations and had hives breaking out on her arm. The pair were heading to a local hospital but were not sure of the exact route. Forest Ranger Krulish led the way with lights and siren, advising Cattaraugus County 911 Dispatch about the severe anaphylactic reaction. The Ranger requested a rescue squad meet the hikers along the route with epinephrine. On Buffalo Road, ALS ambulance personnel met the patient and administered epinephrine and transported her to the hospital for additional treatment.